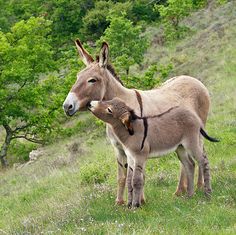 The ass and her colt lived with a local farmer at Bethany in the Mount of Olives…
She had been a hard worker and was greatly loved by God. She knew the Creator in a special way and every morning she would lift her head in worship. Her owner thought she was just sniffing the air, but no, Silly, for this is what she was called, was looking to Heaven in worship.

There were times when the Creator spoke to her heart, and she would stop to listen: that is how she got her name. The farmer thought her stubborn and silly, and that her stopping and starting was all for no reason. He deemed her lazy, one who found it hard to put one foot in front of another. True she had been tired lately, “but so would you,“ she thought, “after all it isn’t long since I gave birth to my beautiful son.” She had called him Especially Chosen, for the Creator had told her that he had been especially chosen for a very important job.

Her master often tied them up at the rails and it was here that she taught her son as much as she could. She would nuzzle him gently and teach him to also worship the Creator throughout the day. They enjoyed the peace He gave them and quietly awaited the day when Especially Chosen was to be called for.

“Mother,” he said. “Yes, my dear,” she answered. “When I am called, whenever that time might be, do you know what my job will be?” “Ah!” sighed Silly, “The Creator told me one day that it is the same really as all of us have, but yours is especially unique. The Messiah is coming and one day you will be called upon to carry Him: however my son it is not the carrying that is important, it is the lifting up, so all can see Him.” “Wow, really!” whispered Especially Chosen.

“Yes, my son, it is really true. Perhaps it is now time for me to tell you the rest. No one has ever ridden you and I can tell you it is a strange feeling. When it first happened to me I hatted it and I kicked and bucked to try and get them off. Sometimes it worked, but eventually I got used to it. Especially Chosen, you must not kick and buck when the time comes, but look to the Creator for the strength and calm to fulfil your job.” “I will mother,” he quietly answered.

The day came when the disciples came to collect him. Jesus had told them where to find them both and his heart thrilled that at long last he was to carry out his special job. His mother had nodded her head as if to say good luck and off he went. What surprised him was that even his owner let him go without any complaint.

The disciples put their outer coats on his back and he waited patiently for the Messiah to sit upon him. When He did, Especially Chosen hardly knew he was being ridden, for his heart was already communing with the Creator in praise.

Jesus stroked his neck in love and the little colt lifted his head and proudly walked over the clothes and palm leaves that were being dropped on the ground in front of them. He hoped he was tall enough so that all would see the King and for a short time he forgot that donkeys were the lowliest of animals and often the laughing stock of most of creation. Everyone present shouted in praise: "Blessed is the King who comes in the Name of the LORD!"

When the Messiah had finished his ride, Especially Chosen found himself quietly following Him wherever He went. All week long he quietly trotted at a safe distance. Folks sometimes looked, a couple tried to catch him, but he managed to keep abreast of them and still keep his eyes on the Master.

Then one night to his horror, as the Messiah prayed in the Garden of Gethsemane, Judas, a wicked man, brought armed guards who took Jesus prisoner. The little donkey ran after them, he even nudged two or three to try and help, but the Creator calmed his beating heart and simply said, “It is my Will.” After this Especially Chosen quietly walked nearby, and stood at the wall of the temple and listened to their harsh tones. He followed when they matched his Master over to Pilate. Tears ran constantly down his face and dripped off his nose as he watched the Roman soldiers beat Jesus so badly. In fact, if he had not continued watching, he would not have know when they brought his Master out with the cross on His back, for by then He had been beaten so badly that Especially Chosen would not have recognized Him.

By now he could not follow closely as people seemed to come from everywhere. By the time he had arrived at Golgotha, the Messiah was already hanging on the cross. This was almost too much to bear, but the presence of the Creator was very near and Especially Chosen looked on in silence.

It was then that he heard the Master’s voice speaking to his heart – “I too have been especially chosen. Thank you for lifting me up so others could see me and praise my name. Go home to your mother dear little friend for our job is now completed. Never forget you are very, very special to me: go, your mother awaits.”

By now a dreadful darkness was coming over the earth. There was sadness in his heart, but also a wonderful peace and even when the earthquake hit, it didn’t frighten him. When the darkness lifted three hours later Especially Chosen made his way home and his lovely mother Silly nuzzled him with love and contentment in her heart. It was then they both lifted their heads to heaven in praise and worship, for they knew that they had both been especially chosen to serve the Creator.